Tring Festival of Fire all set to sparkle on November 4

Tring Festival of Fire all set to sparkle on November 4

Tring’s annual firework fest will take place again at Tring Park Cricket Club on Saturday November 4. The event will feature an array of fantastic food and drink stalls, a guy parade and entertainment on the JR Smith stage from local artists. Acts that will be performing include the Tring School Swing Band, Rock Chorus and for the first time, the blues and folk band from Hemel Hempstead, Sweet Corn Bread . The centrepiece of the evening will be some spectacular fireworks display set to popular classics.
Approximate running times are as follows:
5.30pm – Doors open: Food stalls and Beer Tent, Carousels, Sparkler area
6.00pm – On stage: Tring School Swing Band
6.30 – Winner of the Tring Guy Competition. Lighting of the bonfire with mini display.
6.45pm – On stage: Rock Chorus
7.20pm – Main Fireworks display commences to music
7.50pm – On stage: Sweet Corn Bread
8.30 – Close 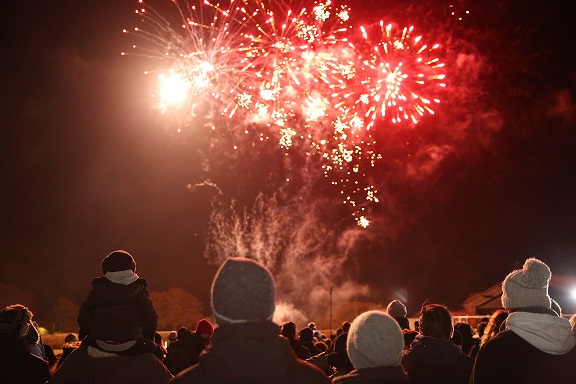 Several local businesses are supporting the show including The Akeman, Tring Brewery, Tring Park Day Nursery and One Stop Doctors.
Helen Cook, Commercial & Operations Director from One Stop Doctors, is delighted to be sponsoring the event for the first time: “As a local medical clinic, looking after people is at the heart of what we do. Building relationships with local sports organisations and the community is exactly what One Stop Doctors is about so we are delighted to have this opportunity to be part of the Tring Festival of Fire, at a location that serves so many clubs and activities as well as the local Tring community”.
Richard Shardlow of Tring Brewery has supported the event since its modern day inception five years ago: “The Festival of Fire is one of many high-quality fixtures in the Tring calendar, which we are delighted to support. What better way to enjoy the fireworks than sipping one of our ales!”
Cricket Club Chairman Simon Shearman promises another great family night out: “The fireworks night makes a vital contribution to maintaining a wonderful community sports facility and we are extremely grateful to the volunteers that make it happen, and for the support of the town and our sponsors.”
Discounted tickets can be purchased from September 23rd to the end of October via the event website: www.tringfireworks.co.uk and Facebook: www.facebook.com/TringFestivalOfFire. Family only tickets can also be bought from Beechwood Fine Foods, Tring Brewery and The Akeman at a discounted prince of £15 which covers two adults and up to three children below the age of sixteen. On the gate tickets will be priced for families at £20, adults £8 and children under sixteen at £5. Under five year olds have free entry.
All the latest event announcements can be followed on the Tring Festival of Fire Facebook page and @tringfireworks on Twitter